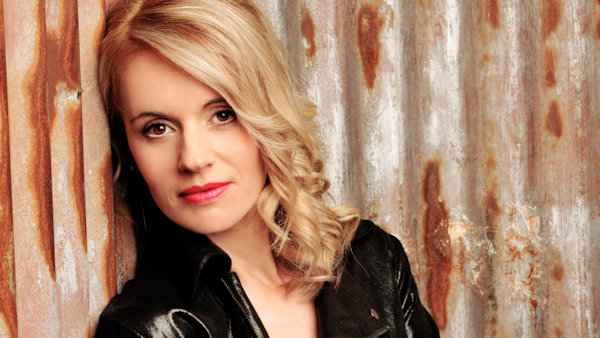 Joanne was born and raised in Melbourne, Australia and lived in Los Angeles for over 20 years but in 2018 big city life no longer appealed to her, so she gave up the city for simplicity by moving to Maui, Hawaii. She says it was the best decision she ever made because she wakes up everyday to endless sunshine, the fragrance of plumerias, lush green nature, and pristine beaches.  She believes nature is a great teacher and healer and she has been vegan since 1994.

When she was living in LA as a screenwriter, she was told that in order to be a successful screenwriter, she would need to write 4-5 screenplays per year. But to her, creativity can’t be forced, so now she writes when she feels like it. She formed her own production company so she could write strong roles for women. She says she loves to write all-female comedies for fellow Gen X women.

The very first show she wrote, produced and performed in, was the multi-award winning sketch comedy web series, Vegan 101. The series launched online in 2009 and ran for 3 Seasons, ending in 2012. Season 2 guest-starred Oscar-nominated actor, Eric Roberts with music by Keaton Simons.

Her TV pilot script, Life of Groupies, won an award as an official finalist at the 2014 Hollywood Screenplay Contest and 2014 Beverly Hills Screenplay Contest. She also wrote a romantic-comedy feature film called You Had Me At Aloha™ which was a 2017 Screenplay Award-Winner at the Honolulu Film Awards.

Joanne had visited Maui a few times before she made the decision to move. She says that being a natural born city girl, adjusting to island life wasn’t easy. She still had many city girl traits and expectations and couldn’t get her head around the slower pace. She used her time to meditate more, connect with nature and slow down. She says it was like shedding the ego and reconnecting to her authentic self.

Now she helps women transform themselves to create a life of freedom, fulfillment, and happiness. As a wellness coach, she wants to make a difference.

She works with clients to achieve optimal health by providing support that will positively transform your life through positive psychology, improving your mindset, discovering your strengths, goal-setting and developing strategies to overcome obstacles.

When it comes to wellness, she says we need to look at a holistic approach through the mind-body connection. Good nutrition can improve mental health. A whole food plant-based lifestyle is good for your mood, heart, and increases blood flow to the brain. Joanne has been vegan since 1994 and can help people smoothly transition to plant-based foods, so you can nourish your body and thrive.

Each of her coaching sessions is tailored to your goals and vision to help you flourish and live your best life ever because now is all there is. You’ll be given the necessary tools to help restore your mind, body, and spirit to become the best version of yourself.

Many people from all over the world visit to Maui to heal. Healing comes from the earth, the water, the people and the surroundings. For those who come to Hawaii, the ocean “calls” to them and helps them heal.

Joanne offers one-on-one coaching in-person, Skype or phone, so no matter where you are, she can help you on your journey.